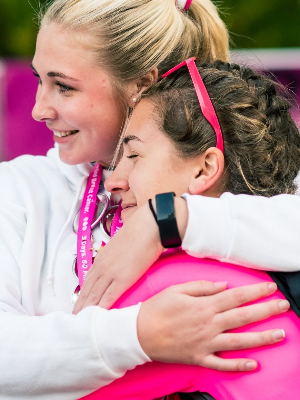 Hugs are essential on the 3-Day!

Hi! My name is Danielle and I am 21 years old. I have been involved with the 3-Day since I was 8 years old, when I became a Walker Stalker for the first time in Philly! I watched my uncles, the TuTu Brothers, ride their bikes on route safety and cheered on hundreds of walkers. I officially became involved when I was on the very first Youth Corps in Philly in 2011, and I participated again with YC in 2012 and 2013. I then walked the 60 mile journey for the first time in 2016 in Philly with my mom and a team of YC alumni. In 2017, I walked again with my mom in Michigan. I was a One Day walker from 2017-2019 in Philly, and I also volunteered with Medical Crew in Philly. I was also on Hotel Crew with my mom in Boston in the summer of 2019. Now, I am so excited to say, after 2 years of waiting due to Covid, I will be a Youth Corps leader in Chicago in 2022!

Susan G. Komen first became a part of my family's lives back in 2006, when my grandmother was diagnosed with inflammatory breast cancer. I was only 6 years old at the time, and my brother was 2. After rounds of chemotherapy, radiation, surgery, a clinical trial funded by Susan G. Komen, and lots of love and support, my grandmother became breast cancer free later that year. As a thank you and as a way to give back, my uncles participated in their first 3-Day event in 2008.

In late 2010, my grandmother was diagnosed again with breast cancer, and in April 2011, she lost her battle. I was only 10 and my brother was only 6. Over the years, my reasons for participating have been increasing. I add more names to my list of people I participate for. I learn more about people I know who have been affected by breast cancer in one way or another. I participate in the Susan G Komen 3-Day so no other grandchild has to lose a grandparent at such a young age. I raise funds and awareness for the survivors, the fighters, and the angels. I am a part of this event for a brighter future, and a world without breast cancer.

If you are unable to donate online, please print out a donation form.