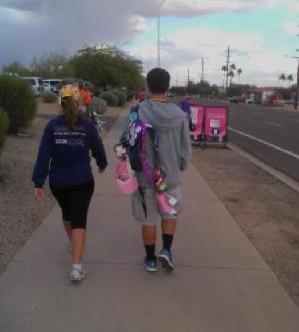 This is my story of Janet and the beginning of my life commitment to the Susan G Komen 3-Day 60 Mile Breast Cancer Walk.

When I met Janet over 40 years ago, she was twenty-five years old a very young Airman First Class in the Air Force reserves.

I disliked her instantly.

I thought she was the most arrogant individual I had ever met in my life.  She was pushy and bossy and totally into herself.  Janet was all about ‘whatever you can do, I can do better’ in those days.  Needless to say, it didn’t take me long (maybe a week) to grow to love and respect the very qualities that I hated at first glance.

Somehow fate had thrown us together and we became best friends. For the next twenty years Janet and I lived vicariously through each other lives.  We were total opposites in every way.  She was wild and adventurous.  She traveled to exotic places.  She road motorcycles, raced cars, water skied, hunted wild animals, fished, climbed mountains and snow boarded.  She had chosen a career that would allow her to live the life that she wanted to live.  And she did live it every day.

I was a young mother with two children.  My life consisted of diapers, homework, and PTA meetings.  My vacations were to Disneyland and Grandma’s house for the weekend.  I went to night school and entered a career that would keep me home and grounded for my family.  I loved Janet’s life and she loved mine.  She loved my kids, my grandchildren and always reminded me how lucky I was to have them.  Janet never stopped trying to make me just a little more adventurous.

Janet moved away and so did I.  We spent the next fifteen years or so connected by the telephone, emails, and an occasional visit; always remembering each other on birthdays and Christmas.  We had one of those relationships where we could go for months without speaking then just pick up the phone and carry on as though no time had passed at all.  We shared every achievement, every move, every new car or truck, every new love or grand baby, every crisis, every heart break; she was truly my lifeline on more than one occasion.  Anytime something significant happened we would pick up the phone without even thinking about it.

In January of 2004 I got an email from Janet that changed my life forever.  I had not heard from her in almost a year.  I had tried to call her without success, so I sent her one of our famous ‘are you out there?’ emails.  She responded with the devastating news of her cancer.  I could not breathe.  At that moment I knew that I had to be with her.  I had to help her through this unthinkable horror.  I could think of nothing else but Janet and her struggle.

That June I spent a week with her at MD Anderson Cancer Center in Houston Texas.

Everyone should spend a week with someone who is fighting cancer.  The perspective that it places on your life, in your heart can not be described in mere words.  Every hour of every day Janet was presented with a new challenge, a new treatment, or a new decision to be made about her life.  Janet was forced to make decisions on a daily basis that most of us will never have to make in a lifetime if we are lucky.  She not only made those decisions, but she also kept her sense of humor, and she never gave up on the hope that she was going to beat her cancer.

It was not hard to continue living, even with the black cloud of cancer hanging over your head, when you were with Janet.  She spent every day planning our lives and what new adventures we were to have together.  Janet was in control of her life and wanted me to see and do everything she had done.  I still have the list.  It will take me the rest of my life to get through it.  But I am going to attempt to be a little more adventurous.

Janet loved life.  I feel fortunate to have been there in the early part of her life; to share in her energy and fearlessness and then to have been there when her life ended helping her with her battle against breast cancer holding her in my arms when the war was finally over.

In the last few months of Janet’s life she had focused on two things; two milestones that she was determined to finish. To become cancer free and the Susan G. Komen 3-Day Walk for Breast Cancer scheduled for July 22nd, 23rd and 24th, 2005.

She knew she could not walk sixty miles.  She knew that all along. She just wanted to walk out of the opening ceremonies with her team and she wanted to walk into that survivor’s circle with the other survivors.

She wanted that pink survivor hat at the end when it was all said and done.  She told me on the day she died to make sure I went out there and got her hat.  I believe her exact words were, “I paid for the damn thing, and I want it whether I can walk or not.”

I made a promise to Janet to walk the 3-Day so no one else would have to go through what she had to endure.  I have honored that promise every year since 2005.  And I proudly carry her pink survivor hat with me every mile.

I miss many things about Janet but mostly, I miss my best friend.

If you are unable to donate online, please print out a donation form.