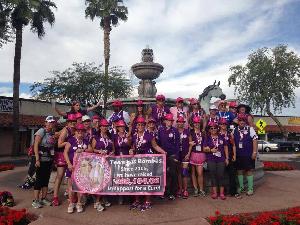 Please join us as we come together as a team and with the Susan G. Komen 3-Day® community take on a bold challenge in the fight to end breast cancer. The Komen 3-Day is a 60-mile walk over the course of three days. It will be hard, but it’s not as hard as breast cancer. We won't stop until breast cancer does.

Here are our team highlights:

In 2021, Lisa and Jacki are joining together as Co-Captains to lead the team to raise $1M!
We would love to have you join us! We have an experienced team and LOVE getting new people to join us! Especially if it's your first time!

We promise you an experience that you will remember for the rest of your life!

Find out more about our team here: http://www.lasbombas.org/