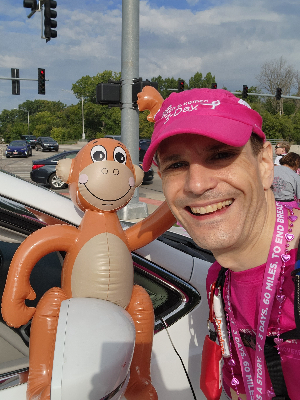 I am a man, a husband, a father, a brother, and a son. Two years ago I was a Team Captain and it was my first year being a Team Captain (or even having a Team). Last year I walked alone (although no one ever walks alone at the 3 day)! I have been a part of the Susan G. Komen family (the pink bubble) since the year my mom died from breast cancer (2009) after being a 13 year survivor. I walk in memory of her and all the women in my family that have been affected by breast cancer (both grandmothers and two great aunts also died of breast cancer; two out of three of my older sisters are survivors, the third taking significant proactive steps to avoid a potential diagnosis - whom really is also a survivor and my original inspiration to do the 3 Day). I was tested for the BRCA mutation and was found not to have it but still walk for all affected by this disease including my wife and children, 14 year old Gwen as well as 16 year old Riley whom were only 1 and 3 when we lost my mother to this horrible illness.

I started out planning to walk with my sister in 2009 before we lost my mom, then because of the overwhelming grief my sister and I decided to defer our walk to 2010. In 2010 we walked together with my sister ending up sustaining a knee injury after the first day and unable to continue on. I finished out day two but couldn't keep on the full walk without her by my side, emotionally. I did go to the closing ceremony though (she made me) and it was incredible! The 3 Day has been the most well run fundraising and emotionally supportive event / organization I have ever participated in. The next year, in 2011 I decided to walk alone and complete all 60 miles myself, my sister decided to join the crew. She loved the lunch crew experience so much, and there was such a need for medical crew members I put my emergency medical license to use (volunteer for more than 20 years now) in 2012 and 2013. That was the last year the walk was in Chicago until returning recently. We took a bit of a break after that but then I returned for my fifth walk recruiting my amazing wife, Vanessa and close friend, Jen! Neither had walked 60 miles before but both were awesome on the 3 day, Jen having just recovered from a near death experience with COVID exactly one year before. We were also joined by an awesome colleague Traci! On that 3 Day last year in San Diego I realized the true meaning of the pink bubble. I did not fully realize what the 3 Day was going to do with the photos that we sent in of my mother and grandmother. On the second day we reached the final mile into camp and saw the photos. I broke down and cried. My team and countless other 3 Dayers, strangers, came by and picked me up, hugged me, held me, and gave me strength to keep moving on. I gave those photos to my sister who was with me in spirit and my strongest support from afar. My lifetime fundraising has reached more than $12,000. It is small compared to some of the amazing women and men that fundraise for the 3 Day but it is my contribution so far...I'm just getting started. I already have friends that have asked me if I am walking again in 2023! Well the answer is YES! I have formed a team, Treasured Chests. Join me, my new friend and first time walker in 2023 that I just met, Andrew, my close friends and some of the most incredible humans I know Dr. Claire and Maren! The 3 Day journey is about the pink bubble! It is about friendship, support, care, compassion, empathy, kindness, love, and so much more.